I was a young buck entering my freshman year in high school when I became obsessed with the stock market.  Each day I would come home, flip on the TV, and watch every second of the ‘Closing Bell’ on CNBC while simultaneously perusing the ticker at the bottom.  After convincing my Dad that I was perfectly capable of investing in the stock market, he allowed me to dump $2,000 of accumulated birthday money in the market through an ETrade account.

The first year of investing was incredibly exciting!  I placed bets on sexy new names like JDS Uniphase, Global Crossing, and Cisco.  In the span of one year I doubled the value of my portfolio.  My euphoria hit its peak when my portfolio broke $8,000 and I was certain the market would continue its torrent pace indefinitely.  The bubble subsequently popped and I sold my stocks for a solid 100% gain in two years.  Many others weren’t so lucky.

The dot-com bubble of 1995-2000 was marked by soaring valuations, free spending, and a horrific aftermath.  According to dot-com theory, a company’s survival and future depended upon amassing the largest customer base possible.  Large losses in the early years were easily forgiven in hopes of future glory.  Amazon, eBay, and Google survived the bubble and flourished into legitimate growth companies with sustainable business models but most quickly fell off the face of the Earth.  Let’s take a small peek at the dot-com graveyard:

Boo.com – Then: Spent over $150 million in an effort to create an online fashion store.  Now: a forwarding link to http://www.hostelworld.com/.

WebVan.com – Then: Built $1 billion of infrastructure to support its web-based grocery delivery service and burned through the $375 million it raised at IPO.  Now: A small entity within the Amazon.com family.

eToys.com – Then: Burst through the gate with a $166 million IPO.  The company reached a high of $84/share and crashed to a low of $0.09/share.  Now: a small but self-sufficient e-tailer.

I was on SharesPost earlier today when I noticed something incredibly surprising.  The SharesPost Venture-Backed Private Company Index, which takes into consideration (1) private transaction value, (2) research report value, (3) current posts value, and (4) last round financing value, scared me a little bit.  Take a look at the current valuations for seven of the most traded companies on the SharesPost exchange. 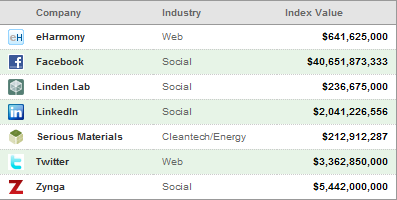 Is Facebook worth $40 billion on $1-2 billion in revenues for 2010?  Is Twitter worth over $3 billion while turning losses year-after-year?  Is Linden Labs worth $236 million when media writer Hedirman Supian calls the service sputtering, empty, boring, and clunky and Metaverse Journal reports that there has been an 11% drop in user visits last year?  The tech world is overheating, and no one is watching the oven.

Beyond the questionable business models of many of these new tech hot-shots, the entire industry is showing signs of a massive bubble.  The SharesPost Venture-Backed Index has risen from 140 to 200 from June through December.  Has the tech sector increased in value by 40% over the last seven months?  Hardly.  The more likely case is that there are far fewer large investment opportunities for mega-funds like Dark Sky Technologies (DST), Institutional Venture Partners (IVP), and New Enterprise Associates (NEA).  Review the haunting first graph (NASDAQ daily levels through the dot-com bubble) and compare with the second (SharesPost Venture-Backed Index).

While the public markets are finding their footing, high-flying private Internet companies are the new black.  We may have found the next Google in Facebook, but other technology companies (and their investors) riding the euphoria may not be so fortunate.

Is a Burgeoning Tech Bubble Amiss?