The day before Facebook’s IPO was Thursday, May 17, 2012.  It was also the day when at least five of my friends called to ask for my advice on the buzzworthy offering the next morning.  Should I buy?  How many shares?  I’m on Facebook all day, so why wouldn’t Facebook be a good investment?  $40 seems like a cheap price, right?  I knew better.

A casual trader on E-Trade since I became enamoured by CNBC while in high school, I’ve been told by some of the best traders to buy when a stock is hated most by the market and sell when a stock is celebrated.  I used this methodology to short RIMM from $60 per share all the way down to $10.  I was convinced of irrational exuberance in the case of Facebook.  Friends who never placed a trade in their lives were dropping $5,000-$10,000 on a stock they didn’t truly understand.  An investment with an $80 billion market cap and trailing 12-month revenue of $4 billion didn’t seem like a solid long-term investment.  I told myself I’d dip my feet into the $fb waters if they could find compelling ways to get the average user to enter a credit card on their website and actually pay them money.  Facebook knows it won’t be able to keep their nose above $40 billion on boxy desktop website ads alone.

In early August, I proposed to my girlfriend of two years.  We created a life event on Facebook to share the good news with all of our friends.  The post caught on like wildfire.  When the dust settled, the picture of the ring garnered 180 likes and 62 comments.  The life event drove 36 likes and 11 comments.  Facebook’s EdgeRank algorithm saw the initial popularity of the post and blasted it to the top of our friends’ new feeds, allowing its popularity and exposure to compound.  I sat back in my chair, remarking how posting a life event on Facebook is the equivalent to posting an announcement in the local newspaper ten years ago.  Back then, I definitely would have paid $10 for an ad in the local paper.  Today I wouldn’t think of paying anything to my paper, as its viewship is waning and doesn’t include my demographic.  But would I pay $10 for the ability to make a special post on Facebook that I can customize and highlight?  Possibly.  A popular Facebook post does plenty to get the desired effect.  To pay Facebook anything, I would need something more.  More placement.  More posting options.  The ability to target certain friends.

On October 3rd, Facebook launched Promoted Personal Posts.  Boom!  Called it!  For $7, anyone could now promote a post so that more of their friends see it.  I anticipated new posting options and features with the promoted option, but when I clicked the “promote” link on one of my posts, I wasn’t able to alter or enhance it in any way.  $7 would simply give me more exposure.

Anxious to see how promoting a post could increase viewership, I entered my credit card information on the website and hit the gas on the following post:

Let’s be honest, this is not one of my best posts, but I wanted to see what Facebook could do to drive views.  I received 8 likes and two comments by the end of the week, one of which simply brought attention to the sponsored nature of the post.  I had a few of my friends track the promoted post’s location in their news feed, and they reported that it returned to the top of their feed periodically during the entire week.  Once the campaign ended, Facebook sent me an email breaking down the post’s viewership: 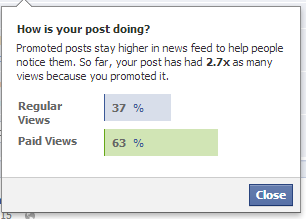 My $7 bumped views by 2.7x.  Not too bad for less than a 10-spot, but I’m not sure when I’d personally use the promote function.  I don’t care who comes across my random posts and links.  I don’t care who stalks my photos and albums.  I was certainly excited to share the news of my engagement to all of my Facebook friends, but EdgeRank did a solid job of that already.  I suppose I might use the promoted post feature if I had a new pet-sitting business and wanted to make sure all my Facebook friends saw the post.  Having a yard sale?  Sending out a party invitation?  Yea, I’d might promote those too if I was desperate.

Mashable ran an article asking its users if they would promote a Facebook post announcing a new job or sharing pictures of family and friends, and only 8% responded they would.  8% isn’t insignificant, but Facebook will have to do better than news feed placement amongst friends to make $7 worthwhile.

Facebook’s value is partially contingent upon how much money it can wring from its one billion+ users.  Promoted Personal Posts is one step in that direction.  Physical gift-giving is another.  While I don’t think Promoted Posts is a silver bullet, the feature is another avenue for Facebook to drive revenue from users.

I enjoy the news feed because it shows me posts from friends I follow or care about.  EdgeRank works.  Well.  Almost too well.  I fear sponsored spam will start popping up on my news feed regularly, a result I tried to avoid by “liking” as few pages as possible.

I expect Facebook to post weak earnings on the 23rd, mostly due to users migrating to mobile in droves.  Mobile revenue will increase steadily over time, but the key to their success will be how they use that small screen to drive dollars.  Good luck young buck.